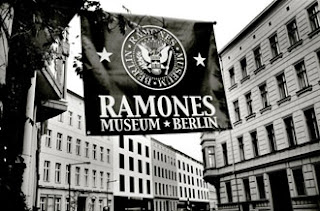 In a band alchemy full of jarring contrasts, one of the most interesting (and underdiscussed) is the friction between JOHNNY's jingoistic, Star Spangled Banner waving patriotism and the nagging obsessions of principal songwriter DEEDEE, sprung from his German upbringing. Born to an American soldier married to a German, and mostly raised around military bases in Berlin until the age of 15, he never seemed to shake the childhood images of the WWII rubble from his unconscious--and the doomed, fascistic shadings of his youth never completely disappeared from his lyrics for too long.

For here now, we offer a brief guide to the principal appearances of this flavor in the RAMONES' music. Delving more deeply into subtle references would surely have resulted in a longer list--witness the knowing (and surprisingly literate) wordplay of ALL QUIET ON THE WESTERN FRONT's locale change from WWI to NYC-- but for now the focus will concentrate on the clear cut. Such military precision ist gut, ja?

1.) BLITZKRIEG BOP--Straight out of the gate on the debut album, DEEDEE transforms TOMMY's paean to rock concerts into something more sinister with the lyrical substitution of just a handful of WWII references and POW (or worse) camp images. The band's baffling mystique is cemented in their bizarre ability to make an exhortation such as 'shoot them in the back now' somehow sound celebratory.

2.) TODAY YOUR LOVE, TOMORROW THE WORLD--Eins, zwei, drei, vier! This remains the RAMONES track most heavily steeped in German content- from the title, derived out of a misattributed Hitler slogan (altered to reflect either amorous or career minded aims) to the humorous storm trooper bumbling of the verses (which were censored a notch down from the unforgivable "I'm a Nazi baby, yes i am.") The image of the kid being pushed around town seems inseparable from DEEDEE's psychology, and one longs to have further revelatory detail expounded upon.

3.) COMMANDO--Of course rule #1 is 'The Laws of Germany.' However, unless one wants to speculate the source of 'kosher salamis,' any further German connection is minimal at best.

4.) I WANNA LIVE--That this attempt at anthemic life affirmation is purveyed through the paramilitary actions of an imprisoned gypsy prince is a tad bewildering, but there can be no question that when it comes time to take up arms you'd do well to opt for 'fine, German steel.'

5.) JUDY IS A PUNK--One might attempt to discern a meaningful political motivation or connection between the twin locales of Jackie and Judy's adventures-- aiding the Symbionese Liberation Army in San Francisco, and skating for an ice pageant in Berlin-- until JOEY helpfully reminds us that, life endangerment aside, he doesn't know why they do what they do.

6.) BONZO GOES TO BITBURG--The public relations disaster of President Reagan marking the anniversary of V-E Day with a planned visit accompanying West German Chancellor Helmut Kohl to a cemetery near Bitburg-- only to find that, contrary to what they thought, no Americans were buried there but several of the Waffen SS were--led to an uncharacteristically political protest piece by DEEDEE, thoughtfully calculated, but timely and powerful. Despite widespread outcry, Reagan refused to reconsider the ceremony, not wanting for either Kohl nor himself to lose political 'face.' He then exacerbated the situation by supposing that drafted Nazi soldiers "were victims, just as surely as the victims in the concentration camps." Stubbornly carrying through with the plans laid bare that the U.S. leader had no qualms about maintaining a strong persona politically even at the expense of appearing weak morally, and DEEDEE overstated the American exasperation only slightly here when he implored the ex-actor "Don't become one of Hitler's children." (What a difference a decade makes!) Despite the single's notoriety, an infuriated JOHNNY insisted that the song eventually be renamed something less insulting to his favorite president.

7.) EVERY TIME I EAT VEGETABLES IT MAKES ME THINK OF YOU--JOEY takes an unexpected turn at the well, weaving one of his most delirious lyrics around a portrait of the psychosis-inducing experiences encountered by a female friend. Hard to say exactly what happened, but it definitely involved Hiroshima, lettuce, dumpsters and farina--and it has all brought her to a Thorazine induced stupor in the dreary backdrop of East Berlin.

8.) IT'S A LONG WAY BACK TO GERMANY--Proving that even in their vaguest, slightest lyrics the inclination towards the inclusion of this durable turf was impossible to resist for any significant stretch of time.

9.) ENDLESS VACATION (demo)--This bonus track demo of one of DEEDEE's vocal appearances on TOO TOUGH TO DIE is notable for his out of nowhere end of song adlib--omitted in the later version--  maniacally intoning 'Deutschland! Deutschland!' until the final chord. Any connection to the track's actual lyric is imperceptible, and one is left with the impression that his obsession is so pronounced that he could begin babbling about Germany without provocation at any point.

10.) BORN TO DIE IN BERLIN--The 'little German boy' is magnetically, inexorably drawn to his final resting place. Hypnotically, over a lifetime, like an elephant lumbering towards the secret burial ground, the spot to ultimately lay one's head seems unavoidably predetermined. DEEDEE's last major contribution to the band is devastatingly world weary (he even sings a bleak verse auf Deutsch--go here for a translation: RAMONES BORN TO DIE IN BERLIN), and one is surprised only to find that his prophecy was incompletely realized, succumbing in the tacky confines of the City of Angels instead of settling into the soil of the Vaterland which so fueled his visions.

Of course, even after DEEDEE's departure from the band these predilections could not be quelled, and we'll conclude this topic with a couple of solo era testimonies. The first is notable for a unlikely concern regarding soccer match safety, the second offering-- from the inexplicable DEEDEE KING era-- is notable for a rap in the native tongue(!).

DEEDEE RAMONE WHY IS EVERYBODY ALWAYS AGAINST GERMANY?

Posted by BuncombeShinola at 5:19 PM