SAME AS THE FIRST--List #6: RAMONES TOP 10 MOST BLATANT SONG 'INFLUENCES' 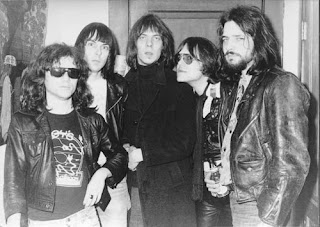 
For the uninitiated: 'influences' are what artists call the older materials that they steal the most from. There is no shame in this, virtually every musician has stood upon the shoulders of those who have come before, breaking the ground and laying the foundation which they build upon. Certainly in the literary and film world such 'borrowing' is common. Even in the realm of the finer arts, such as painting and classical music, tangible development can be charted as one explores the 'influences' each artist favors mapped out over overlapping generations.

Rock 'n' roll, with its basic adherence to somewhat defined forms, is as generally vulnerable to recycling as blues, country and jazz. Often musicians 'pay tribute' to their predecessors by producing intentionally familiar 'homages.' (Ironically, sometimes a more flagrantly unchanged reference can be held in higher esteem than a nicked detail which is knowingly disguised.) As revivalists of what was viewed as a passe form in their time, the RAMONES frequently adopted the varyingly acceptable methods of such appropriation. At times, they worked in specific genre cliches as a matter of respect to preformed parameters. (It's not so much that the intro of YOU'RE GONNA KILL THAT GIRL rips off, say, Runaround Sue by DION, it's that the RAMONES are operating in the similar style and adopting the typified motifs.) Other times, they include a precise quote (musical or lyrical) as a nod to an occasionally obscure, admired prototype. (Witness JOEY's tip of the hat to the SEX PISTOLS' Pretty Vacant in the intro to his solo hit WHAT A WONDERFUL WORLD.) And finally, like every other musician (don't let any tell you different!), sometimes they just plain copy stuff that they like.

Which brings us to this list. Usually the RAMONES preferred to keep their retooling discreet. Although ALICE COOPER's I'm 18 prompted a whole slew of the band's material from I DON'T CARE to I JUST WANT TO HAVE SOMETHING TO DO, few might recognize the source material. Same with NOW I WANNA SNIFF SOME GLUE's riff similar to BLACK SABBATH'S Paranoid. (It is quite fascinating how many of the RAMONES' most important antecedents appear here.) In other instances, they wore their influences on their sleeve, sometimes shamelessly so, and that is our focus here. Between JOHNNY's obvious admiration for Fred "Sonic" Smith's look, and the recurrent imagery present in both the POISON HEART video AND the same director's previous success (R.E.M.'s Losing My Religion), it was difficult to confine the list to strictly musical xeroxes. Still, here we have it: the list that a less charitable person might have titled the Top Ten Biggest RAMONES Ripoffs. (Not to be confused with the Top Ten Biggest Ripoffs OF the RAMONES. Perhaps that will be a future list.)

1. JUDY IS A PUNK
Famously, the RAMONES grabbed the vocal gimmick used on the HERMAN'S HERMITS smash hit I'm Henry the VIII, I Am, noting whether the same or dissimilar verse would be sung next. JOEY's frequent citing of the mild mannered Peter Noone as one of his favortite vocalists was a consistently confusing tidbit to the punk-fearing journalists of the day.

2. BORN TO DIE IN BERLIN
Perhaps the group most adored by the RAMONES, the STOOGES get riffchecked as ADIOS AMIGOS draws to a close in DEEDEE's harrowing farewell BORN TO DIE IN BERLIN, whose main lick borrows substantially from IGGY POP's petulantly teenage classic No Fun.


3. SUZY IS A HEADBANGER
JOHNNY claimed that CARBONA NOT GLUE was conceived after some gorging on the classic rockabilly of EDDIE COCHRAN, but it is this track, composed roughly near the same time, which bears an uncanny resemblance to his party anthem C'MON EVERYBODY. The SEX PISTOLS likely noticed this quickly (COCHRAN holding a greater 'icon' status in England), and later opted to cover a hard rock version of the track, as if to underline the similarity.


4. DO YOU REMEMBER ROCK 'N' ROLL RADIO?
The RAMONES' bizarre obsession with teenybopper sensations BAY CITY ROLLERS (or at least their briefly BEATLES level popularity) led them to copy the chantalong concept of their biggest hit SATURDAY NIGHT for the Hey Ho Let's Go section of their first single, BLITZKRIEG BOP. However, a few years later the band went one step further with the leadoff single of END OF THE CENTURY, which plainly mimicked the actual chant itself. (To be fair, both tracks owe more than a small debt to the pep rally intro of the classic 60's instrumental Let's Go (Pony) by the ROUTERS.)


5. THE KKK TOOK MY BABY AWAY
The amusing PLEASANT DREAMS classic features a melody which is mostly a dumbed down  take on the similarly un-pc CHEAP TRICK standard He's a Whore.


6. REAL COOL TIME
This track lifts a key line from Fun Fun Fun by the BEACH BOYS, which may have actualized a tributary allusion to one of the RAMONES' most frequently noted unexpected ancestors, but it also unfortunately made clear how considerably less 'real cool' this track is compared to the earlier untoppable ode to infectious summer celebration.


7. CABBIES ON CRACK
The NEW YORK DOLLS, who swayed the scene which borne everyone from THE RAMONES to KISS, gets the homage in this MONDO BIZARRO stomper, which bears more than passing resemblance to their 2nd lp fave Puss 'n' Boots. You won't hear any guitar leads like THAT on a Dolls record, however.


8. IT'S NOT MY PLACE (IN THE 9 TO 5 WORLD)
Perhaps none too wisely, this extremely uncharacteristic PLEASANT DREAMS hodgepodge pulls a startling move in the middle section, damn near playing the melody of the song that the track is referencing, the VOGUES' Five O'Clock World. The RAMONES merely play it slower (!), which should give you some idea of how little this song gets right.


10. LIFE'S A GAS/ SHE TALKS TO RAINBOWS/I WON'T LET IT HAPPEN
Here's a trio of tracks that, while on paper, may not qualify as outright thievery, are all marked by JOEY's late career predilection for copping phrases and titles from rather over-obvious sources. Of course no T. REX fan (which JOEY clearly was) would have looked past a RAMONES song with the same title as the Electric Warrior classic LIFE'S A GAS without pause. SHE TALKS TO RAINBOWS appeared not that long after the BLACK CROWES scored a massive hit with SHE TALKS TO ANGELS, and their common phrases went unnoticed by practically nobody. And finally there is I WON'T LET IT HAPPEN, which is uncomfortably familiar to any SLADE aficianado via their similarly named track. Again, these three all represent less plagiarism than an exceptionally lazy level of derivation. (OK, maybe the SLADE is a worse ripoff than I remembered.)

Of course, we can't resist revealing the source of ROAD TO RUIN's I'M AGAINST IT ethos!


Posted by BuncombeShinola at 8:04 PM