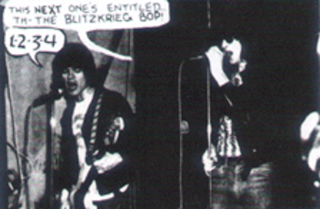 The RAMONES often insisted that they almost immediately resorted to a shouted 1-2-3-4 start to their songs due to an inability to master the 'silent count.' Soon, however, the novelty of the oft repeated intro struck their fancy, and they began to relish the relentless recurrence of the gimmick. Quickly, the retooled weakness morphed into one of their most beloved, identifiable eccentricities.

In a long career where this device would be wielded endlessly (but perhaps less often on their albums than one might think--see Postscript), there would be presented inevitable opportunity to pick a few favorites. And indeed inevitability is the keyword, for as surely as a RAMONES classic became as likely to follow 1-2-3-4 as the number five, the band themselves represented what in retrospect seems an unavoidable step in the progression of Rock 'n' Roll's history. So without further ado, a tribute to the numerological quartet that is the mathematical key to the heart of the RAMONES' sound.


1. I DON'T WANNA BE LEARNED/I DON'T WANNA BE TAMED
Straight out of the gate the RAMONES unapologetically and unaffectedly kick off one of their earliest efforts with their soon to be trademark. Even at this embryonic stage, DEEDEE sounds unashamed and ultra-confident. Also noted for the (non-) record: I CAN'T BE, a similarly obscure pre-debut demo, which catalogues an amusing 1-2-3 (cohabitation, procreation and housecleaning.) This denotes a deadly triumvirate of domesticity which should be avoided at all costs.

2. NOW I WANNA SNIFF SOME GLUE
The early appearance of a 1-2-3-4 triggering the title chant is trumped shortly thereafter by a unique count all the way up to 8, building extra expectation before the heavy middle section riff commences.


NOW I WANNA SNIFF SOME GLUE

3. TODAY YOUR LOVE, TOMORROW THE WORLD
A normal 1-2-3-4 opens the debut's classic closer, but in fitting with the Germanic theme DEEDEE sparks the unforgettable coda with a countoff 'auf Deutsch.'


TODAY YOUR LOVE, TOMORROW THE WORLD

4. COMMANDO
DEEDEE amusingly begins playing his bass even before he completes the opening kickoff, but of course this track's most notable 1-2-3-4 remains the 'rules' militarily mandated by the group. Strict adherence to Der Vaterland, Capitalism, culinary Orthodoxy and maternal reverence all get equal time.

5. SHEENA IS A PUNK ROCKER
One of the less noted details which helps make this track such an exhilarating thrill is that we enter only upon the last 4 of DEEDEE's opening count, causing a tangible, nervous anticipation for what is to follow.


SHEENA IS A PUNK ROCKER

6. CRETIN HOP
This track brandishes a childhood nursery rhyme towards its nefariously celebratory devices, utilizing the (literally) odd count of 4-5-6-7 to better accomodate the subnormals' likelihood of rapturous ascendance.

7. ALL THE WAY
Amidst the bloated production techniques piled upon the END OF THE CENTURY LP by PHIL SPECTOR, the band reassuringly (albeit after a heavy introductory section) blasts into the meat of this track with the standard countoff. Perhaps the album's least galling display of studio muckery, this is the sole appearance of 1-2-3-4 on this release.

8. DANGER ZONE
This TOO TOUGH TO DIE cornerstone features a hilarious, 'studio verite' exchange between DEEDEE and JOHNNY even before they can get to the countoff.

9. I LOST MY MIND
This rather calculated throwback to the classic early approach from HALFWAY TO SANITY begins with certainly DEEDEE's most confused sounding instigation. Did he begin the 1-2-3-4 backwards?


I LOST MY MIND


10. I DON'T WANNA GROW UP
For their farewell abum, the RAMONES opt to start things off in style, coming full circle with a perfectly mimicked 1-2-3-4 from CJ opening the proceedings.


I DON'T WANNA GROW UP


Postscript:
A good friend of mine in high school once put forth the theory that the quality of any RAMONES album was in exact accordance and proportion to the number of times 1-2-3-4 was uttered. This worked fine for me- my favorite album was (and is) IT'S ALIVE, where the count in some form or another appears 28 times. The theory seemed to fall apart considerably, however, with the decidedly inferior LOCO LIVE, which featured virtually the same tally. (Years later, as their final concert drew nearer, a troubling, insidious detail began to take hold: a gradually growing pause between 4 and the songs' commencement, until there existed almost space enough to utter 5. A sobering indicator of time's passage.)

But what of the studio albums? A surprising amount displayed not even a single 1-2-3-4: PLEASANT DREAMS, BRAIN DRAIN, MONDO BIZARRO, ACID EATERS, plus the undeniably strong ROAD TO RUIN and SUBTERRANEAN JUNGLE. The theory felt firmer with the records where it occurred only once: END OF THE CENTURY, ANIMAL BOY and ADIOS AMIGOS. It gets wobbly with the inconsistent HALFWAY TO SANITY, which piles up a much higher count of four. From here though, the rule bears out quite effectively: pretty much five total for each of their first three classic LPs (allowing for oddities such as COMMANDO and CRETIN HOP). And with an undebatable sum of six 1-2-3-4s, the grand nod goes to TOO TOUGH TO DIE, their superlative midperiod comeback.

Maybe Dax was on to something.

Photo by DANNY FIELDS. Information on the upcoming documentary about him DANNY SAYS this way:

Collage by JOHN HOLMSTROM. Buy his new book the BEST OF PUNK MAGAZINE this way:


Posted by BuncombeShinola at 6:19 AM