AND PLAYED MY FAVORITE SONG TOO: TOP 10 RAMONES LOVE SONGS--List #8 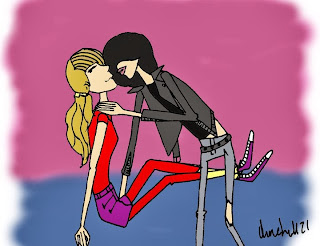 Image by DANCEHALL21! For more of her great work, click here (DANCEHALL21) or links at the end of the blog!


It's been an interesting reversal over time: Originally considered so raw and abrasive that record labels were skeptical whether or not they were even recordable-- but in the present, rightly viewed as so varied, melodic and well produced that the 'punk' label seems too limited a term of description. Ironically, this might have been viewed favorably by the RAMONES, who were initially reluctant to be pigeonholed into the classification. Their eventual dexterity in a variety of approaches beyond their initial two minute blitzkrieg fuzzball barrage aesthetic proved quite surprising, but nothing was so startlingly unexpected as the protopunks' utter mastery of the ballad-- the heartfelt lovesong.

JOEY's vulnerable personality made his inclination towards softer material predictable, but DEEDEE's troubled upbringing left him open to the nakedly confessional composition as well. TOMMY, of course, relished the opportunity to flesh out melodies and arrangements with wider instrumentation, and even JOHNNY seemed to instinctively grasp that for the records and concerts to have better flow, there must be spots where the listener had a chance to breathe. Of course, his decision to become entangled with (and eventually marry) JOEY's girlfriend cemented the central emotional drama inside the band during their later years, and their steely determination to persevere and endure despite such internal turmoil eventually gelled into their raison d'etre.

On one hand, BEAT ON THE BRAT, PSYCHOTHERAPY, COMMANDO and NOW I WANNA SNIFF SOME GLUE. On the other hand, some of the most sincere, attractive and endearing ballads any band has produced since the 60's. They stand as powerful evidence of the RAMONES' often overlooked, ambitious versatility, and spotlighted here, in sequential order, are the 10 that soar highest.


1. I WANNA BE YOUR BOYFRIEND
TOMMY immediately pulls a rabbit out of his hat with the haiku-like precision of this minimalist masterpiece. An advance indicator of what was to regularly follow, this early fan favorite also had a few other interesting early versions, check 'em out HERE --->> RAMONES EARLY DEMOS

I WANNA BE YOUR BOYFRIEND

2. BABYSITTER
The RAMONES show impressive development on this followup to I WANNA BE YOUR BOYFRIEND, which knowingly expands on the earlier track's charms in almost every way: melody, lyric, arrangement and production. JOEY's amusing lament on this previously rather difficult to find track is beguiling and compelling.

3. HERE TODAY GONE TOMORROW
From out of nowhere ROCKET TO RUSSIA dropped this unprecedentedly serious track, not just proof of how brilliant this 'joke' band could be, but also a devastating example of how powerful a tool minimalism can be, wielded in ANY artistic endeavor. Impressive in the studio version, but also an extremely stunning show stopper on IT'S ALIVE.

4. NEEDLES AND PINS
LET'S DANCE proved how effectively an oldie could be retooled into the RAMONES' formula, but CALIFORNIA SUN, and especially this track, showed that the band could meet the originals and match them on their own turf. Simply, an absolute improvement on a cherished classic-- with another perfect vocal from JOEY, but also featuring deft genre details from DEEDEE and MARKY, and displaying one of their best initial attempts at integrating acoustic guitars.

5. QUESTIONINGLY
Melodically, one of the band's most uncharacteristically subtle, and lyrically, one of their most romantically hardboiled. The cathode ray whiskey stupor and wailing guitar figures could have come straight out of a Country & Western song, but the incorrect conjugation of the verb 'to know' reassures you that this is, indeed, still the RAMONES.

6. I WANT YOU AROUND
For the ROCK 'N' ROLL HIGH SCHOOL soundtrack the RAMONES concocted one of their most perfectly heartfelt pleas, full of acoustic guitar, a hypnotizing minor key middle, one of MARKY's finest contributions, and a winningly dead on mix (no need to bother with the inferior, more electrified demo version). Surely one of the defining vocal performances of JOEY's career, this was wisely chosen as an extraordinary centerpiece sequence in the ALLAN ARKUSH film.

I WANT YOU AROUND

7. DANNY SAYS
With girl group mastermind PHIL SPECTOR at the helm, it was elementary that a gorgeous ballad would spring from the hopeful breakout collaboration which was END OF THE CENTURY. However this bafflingly ended up NOT being the heavily overblown and orchestrated cover of the RONETTES standard BABY I LOVE YOU (an unquestioned 60's SPECTOR triumph) but instead the dreary portrait of touring drudgery DANNY SAYS, which is transformed from the humble demo into one of the towering accomplishments of both the band and producer's careers. Unmatchable verses, full of strange and longing details, propel an ingeniously cumulative dense mix, where not a single note played or sung seems out of place--certainly a rarity for this album.

8. MY-MY KIND OF A GIRL
With the later section of their career underway, the RAMONES once again go back to the I WANNA BE YOUR BOYFRIEND well, with surprisingly dazzling results. Sporting an altered rhythm and evocative lyric, the song absorbs and reapplies the lessons of SPECTOR into a more comfortable realm. MARKY is a bit shaky--right before his temporary 'retirement'-- but this only adds to the appeal as the remainder of the group flaunts impassioned, weathered, primitive perfection.

MY-MY KIND OF A GIRL

9. SHE BELONGS TO ME
I'd have to admit, the other 9 songs on this list were no brainers to me, but for the 10th choice i was met with a frustrating logjam of equally merited options. Finally I elected this track, for despite being written by DEEDEE, it is one of the truest representations of the bitter JOEY/JOHNNY love triangle which exists on their records. (Apparently THE KKK TOOK MY BABY AWAY ranks as well, but that isn't a ballad.) The ambitious production by JEAN BEAUVOIR is marred by some galling synthesizer keyboard embellishment, but lemme tell ya-- the 80's were tough on everybody. P.S.- the other also rans were I REMEMBER YOU, RAMONA, 7-11, OUT OF TIME, SHE TALKS TO RAINBOWS and CAN'T GET YOU OUTTA MY MIND. I don't think they really count, but also under consideration were DON'T COME CLOSE, WHEN I WAS YOUNG, SWALLOW MY PRIDE and WAITING FOR THAT RAILROAD.

SHE BELONGS TO ME

10. I WON'T LET IT HAPPEN
Late in the game, the band unleashes an amazingly pure serving of the soft sell-- arguably this release's most pristine track. Borrowing heavily from a similarly entitled SLADE song (see SAME AS THE FIRST-- LIST #6), JOEY wraps his ethos around the acoustic guitars one more time, with age-proof results.

I WON'T LET IT HAPPEN

As always, one bonus for you--  a moving DANNY SAYS at one of JOEY's last appearances, surrounded by friends (song starts at 2:15).


The extremely cool art headlining this blog was created by DANCEHALL21. You can check out more of her often punk- and RAMONE- related work at the following sites. Thanks again for granting permission to utilize your superb designs!


Posted by BuncombeShinola at 1:13 AM