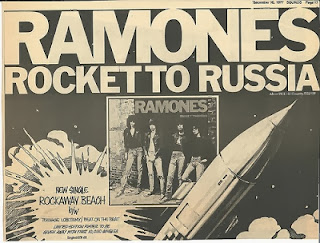 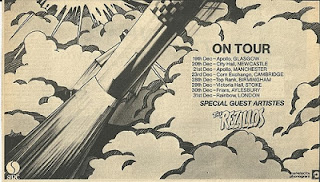 
While the first two RAMONES lps each featured one stab at pure, energetic pop (see LISTEN TO MY HEART and SWALLOW MY PRIDE), ROCKET TO RUSSIA upped the ante with a duo of melodic, catchy confections: I CAN'T GIVE YOU ANYTHING and LOCKET LOVE. Over clean-- even acoustic-- guitars, these British Invasion-influenced attempts at hitmaking (or at least, album filling) exhibited sly lyrical maneuvers designed to subvert the standard romantic storylines. I CAN'T GIVE YOU ANYTHING would draw its strength by way of outright denouncement of typical pathos. LOCKET LOVE, on the other hand, would undermine genre cliches with subtler undercurrents of morbid sexual deviance and threats of physical harm.

Musically, the pair are strikingly similar. Both are built upon riffs which, though constructed within 1-4-5 frameworks, playfully resist being restrictively rooted to their '1' base. If I CAN'T GIVE YOU ANYTHING is slightly more adventurous, and has an overall harder edge, LOCKET LOVE has superior tunefulness, and a more distinctly memorable middle eight. (The lighter arrangement effectively disguises the considerable resemblance to BLITZKRIEG BOP's corresponding section.) The impressively crisp production heightens the appeal of potent performances, and the capable arrangements puts the pigeonholing of the group as mere primitive savants into serious jeopardy. Particular note must be made of the outstanding background vocals, which here reach a pre-SPECTOR era peak.

The final common attribute of the twin tracks is the creation of unlikely rhymes via the ungrammatical omission of key words at the end of familiar phrases, and if this amplifies the later tough guy stance of I CAN'T GIVE YOU ANYTHING, the sum coherence of the present composition suffers somewhat as a result. Still, LOCKET LOVE represents one of the last gasps in the band's efforts to cohere their driving energy into charmingly developed (and perhaps, commercially motivated), unpunk product. In the future, the cut and dried lines dividing 'pop' and 'rock' material in the RAMONES' landscape would rarely allow for the overlapping coexistence evident here, but the upcoming machinations of both the New Wave and 60's Revivalist sub-genres would find precedent in the group's nostalgic adherence to a previous musical era's commitment to album filler exuberance.


Posted by BuncombeShinola at 7:28 PM