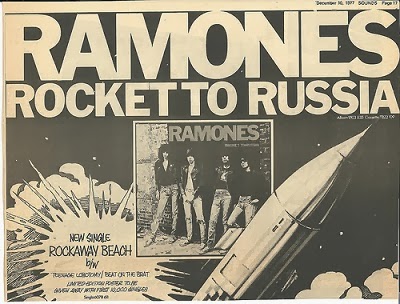 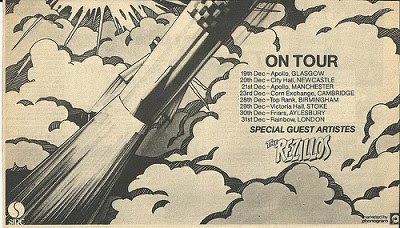 
There can be little doubt that WE'RE A HAPPY FAMILY was intended to be a sequel of sorts to the previous album's PINHEAD: another bizarre lyrical tableau of shattered normalcy, another maddening melody of mercilessly zigzagging chord patterns, another outsider chantalong fadeout featuring demented sound effects. Even the placement in LEAVE HOME's playlist is mirrored-- although, as previously noted, that such apparently natural closers would wind down the first sides of their respective LPs, instead of appearing as satisfying second side finales, remains baffling.

The three part composition flaunts the band's twisted ambitions, striving to concoct outlandish barre chord constructions, all performed with unrelenting locomotion and exactitude. Opening with a not untypical three chord thrust, the introduction moves quickly to a second instrumental section-- a tongue twister alternating between Fsharp and E with matching A-B and G-A connections. Now, on a guitar Fsharp and G are only one fret apart, but since JOHNNY has rooted the next song segments in his higher register, this means he swings almost an entire octave, absolutely unnecessarily, every time they charge through this change. Were it not so exhilarating, it would border on the nonsensical, this odd determination of the RAMONES to wrench the wildest melodies possible from within the confines of their limited (but always sharpening) abilities. Make no mistake, after all of the criticisms of description, all the bemoaning of three chords, of unshakable primitivism, of artless amateurishness, we arrive here at guitar work so confounding that their movements are bound to be unmatchable for any guitarist initially attempting them- other than those who have accustomed themselves to working inside the RAMONES' sound realm.

Without pause the verse suddenly commences. Coming off of the previous section's last G-A, the transition to the dizzying E-G-E-A-E-G-D sequence could be tricky, but the band conquer it into a seamless, seeming effortlessness. As on the previous section, DEEDEE wields his trademark secret weapon, swooping up to higher octaves each time JOHNNY swings down, creating a subliminal, uneasy lack of center, where only the performance's precision maintains an exact point of focus.

Then finally, the lyric begins, a tragicomic cataloguing of failing familial dysfunction. As usual, the humor is sufficiently farfetched enough that the band could reasonably deflect the probability that many of the grim details might actually have personal resonance. Of course, while associations with the leaders of the free world and the catholic church were patently unlikely, the desperate hunger of a chilly Queens, or the distance of an untrustworthy father, or the loneliness of self-medicating while dealing on the side, all ring uneasily true in RAMONES circles. (JOHN HOLSTROM's memorable accompanying illustration ironically portrays a grinning, hyper-mundane clan.) At least a couple of in-jokes optimistically refer to their supposedly soon to be improving fortunes and notoriety, as once again the band mystifyingly transforms the disastrous into the celebratory.

Blasting full on at the quickest tempo found amongst their trio of classic initial releases (only GIMME GIMME SHOCK TREATMENT barrels by in a higher gear), WE'RE A HAPPY FAMILY finds the the RAMONES at an early apex of studio confidence. JOHNNY, DEEDEE and TOMMY perform at a practiced peak of impassioned perfection, while JOEY wrests great humor-- and briefly, even surprising pathos-- from recitation of the litany of troubles which have befallen his kinfolk. One of the most potent and effective mixes on ROCKET TO RUSSIA captures the lightning of the track's crisp drive. As repetitions of the chorus catchphrase swell into the coda, the track takes one more nod to the previous PINHEAD, and psychedelic studio production touches swirl into another logjam of babbling, group dialogue non sequitirs, and cinema verite sound effects of household clamor ('Where's my underwear??'). Interestingly, the CD reveals a longer fadeout than the original LP, and the aural clutter which outlasts even the band's concluding chord are now audible.

Noted by TOMMY as a convincing example of the RAMONES' collaborative songwriting strengths, WE'RE A HAPPY FAMILY outshines its calculating conception, and stands as one of the band's definitive compositions and recordings. Swinging for the fences and connecting in virtually every way, the song exemplifies the beguiling combination of ludicrous hilarity and musical ferocity which defines the group's essence. With PINHEAD delegated to the closer of the live set proper, WE'RE A HAPPY FAMILY almost immediately found a permanent home as the climax of the last encore, joyfully sending the audience of disaffected outsiders home with a final affirmation of communal acceptance. As well, it also served to deliver the band a self aware declaration of reasserted solidarity. The necessity of both gestures would become more and more meaningful in the hard years which lie ahead.

Posted by BuncombeShinola at 10:28 PM