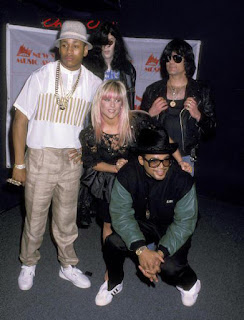 Since the RAMONES' music often seems to exist in a demented, cartoonish semi-reality, when an actual, real-life public figure makes a lyrical intrusion the effect can be momentarily disorienting. This is heightened by their wildly fluctuating taste and motives in choosing the so honoured. Certainly JOEY, after the relatively focused DO YOU REMEMBER ROCK AND ROLL RADIO, was apt to stack numerous namedrops with little regard for contextual appropriateness. Still, the roll call stands as an interesting (if hazy) barometer for the levels and circles of their fame and obsessions.

(For this list, we'll attempt to avoid the over obvious. Entire songs dedicated to RONALD REAGAN, TIPPER GORE or SID VICIOUS & NANCY SPUNGEN hardly qualify as name drops, and even pre-PET SEMATARY there is an inevitability to STEPHEN KING's appearance.)


1. CHARLES MANSON/ADOLPH HITLER (tie)--The RAMONES unwittingly forge a lesson best heeded: If you're going to lyrically mention the world's purest avatars of evil, perhaps it would be best avoided in songs that you are going to consider as singles. (GLAD TO SEE YOU GO & BONZO GOES TO BITBURG)

2. FRANK ZAPPA-- JOEY attempted to align himself with not only prime PMRC target OZZY OSBOURNE but perhaps more bizarrely, with their eloquently outspoken opponent FRANK ZAPPA. One can only imagine the Jazz/Art rocker's response at the 'menage quatre' with the future Second Lady hinted at in the chorus. He also makes a second appearance later in the life of HEIDI, the only bearer of such distinction. (CENSORSHIT & HEIDI IS A HEADCASE)

3. ALAN FREED--The RAMONES were always happy to give lip service to their supporters on the airwaves, even equating local DJ VIN SCELSA and TV Host UNCLE FLOYD with the well known MURRAY THE "K" and ED SULLIVAN (all namedropped elsewhere.) But with 50s Radio pioneer FREED they admirably shouted out to a true pop culture martyr, whose place in history is forever overshadowed by the better known, lesser deserving and genuinely weaselly DICK CLARK. (DO YOU REMEMBER ROCK AND ROLL RADIO & IT'S NOT MY PLACE (IN THE 9 TO 5 WORLD))

4. BOB DYLAN-- The same song's mention of the DEAD BOYS' STIV BATORS is less surprising, however it is amusing that as an indicator of mental instability, merely listening to the early lps of the former is given equal credence as posthumously snorting drugs off of a photo of the latter. In the future THE RAMONES will give MY BACK PAGES a begrudging go. (HEIDI IS A HEADCASE)

5. MOULTY-- Bravely and endearingly, along with JOHN LENNON, T. REX, JERRY LEE LEWIS (and later, THE BEACH BOYS) the one handed drummer of 60s garage combo THE BARBARIANS is given the spotlight. Ater an accident forced him to play with a lefthanded hook, VICTOR MOULTIN was immortalized in their hit Moulty (Don't Turn Away) where he recites his life's details--an inspirational mascot clearly pivotal to their underdog aesthetic. (DO YOU REMEMBER ROCK 'N' ROLL RADIO & 7-11)

6. LESTER BANGS-- Rocks' greatest writer, CREEM magazine's fearless and brilliant critic was an early champion of the group, so this mention is far from surprising. However, it is interesting that the next notable time he pops up will be in R.E.M.'s worldwide smash hit single IT'S THE END OF THE WORLD AS WE KNOW IT (AND I FEEL FINE), a song with an even more obnoxious, parenthetical title. (IT'S NOT MY PLACE (IN THE 9 TO 5 WORLD))

7. 10CC-- After ROCK AND ROLL HIGH SCHOOL's shooting wrapped, it pleased JOEY to note many of the celebrities encountered on the trip- END OF THE CENTURY collaborator PHIL SPECTOR, B movie legend ROGER CORMAN, even ALLAN ARKUSH, the film's then little known director. This spilled over to the next record PLEASANT DREAMS, where the unfortunate involvement of stunt producer GRAHAM GOULDMAN led to the startling lyrical  inclusion of his band--purveyors of such slick seventies schlock atrocities as The Things We Do for Love & I'm Not in Love. To his credit, GOULDMAN also penned several key sixties hits, such as the YARDBIRDS' For Your Love, which the RAMONES briefly considered covering in tribute. Better that, than this. (IT'S NOT MY PLACE (IN THE 9 TO 5 WORLD))

8. THE RUSSIAN BEAR-- In concocting a wrestling themed track, DEEDEE chose a persona already well covered by THE CRAMPS (and originally, THE NOVAS)- REGINALD LISOWSKI aka THE CRUSHER. However, for his opponent he opted for IVAN KOLOFF aka THE RUSSIAN BEAR, who humourously inspires the protagonist's apprehension. It remains unclear whether in 'real life' these two ring veterans ever met inside the 'square circle.' (THE CRUSHER)

9. CLINT EASTWOOD-- One of two Hollywood legends mystifyingly paid tribute in this embarrassingly namedrop filled track, in the same breath as 10CC no less. At least JACK NICHOLSON has tenuous connections to the band's overall trash culture worldview. RAWHIDE probably explains it, or perhaps they caught a late show of REVENGE OF THE CREATURE? (IT'S NOT MY PLACE (IN THE 9 TO 5 WORLD)

10. MONTE MELNICK-- Longtime manager (and underground rock legend) DANNY FIELDS figures prominently in one of THE RAMONES' most unforgettable songs, but elsewhere on END OF THE CENTURY their long abused road manager (and future author!) cameos in a track as underrated as it is explosively exciting, so he gets the nod. In this list, the motto 'No Melnicks' doesn't count. (ALL THE WAY & DANNY SAYS)


Honourable Mention: Songs where the RAMONES mention themselves by name: RAMONA, IT'S GONNA BE ALRIGHT, CHINESE ROCK, R.A.M.O.N.E.S

Posted by BuncombeShinola at 8:48 AM