I WANNA BE YOUR BOYFRIEND--Ramones 4 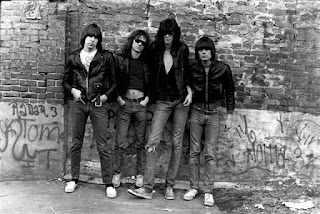 Wrapping up a set of debut lp openers built upon a 1-4-5 foundation, the RAMONES next unveil their first ballad. Mainly, if not completely TOMMY's composition, the title busts out the first of what will be many career 'WANNAS,' soon to become a band trademark (with nearly as many 'GONNAS' flying around as well.)

Along with JUDY IS A PUNK, this was one of a pair of songs tried at both previous demo sessions (see RAMONES: THE EARLY DEMOS ). Undergoing perhaps more alterations than any of the others on the way to arriving at the LP version, the initial key was C, where JOEY seems clearly more confident and comfortable. Then it was brought up a step to D for the later Marty Thau demos, before finally landing in E for the album. JOEY seems to struggle minimally, but there can be little question that chorus' plea becomes more plaintive with each successive hike scaled up the neck. The BYRDS-influenced secondary guitar riff (probably played by TOMMY or JOEY's brother MICKEY LEIGH) has been reduced from the prominent role it was given in the second attempt (where clearly the intent was to amplify commercial aspects of the material) back to more or less the status of background dressing where it originated. Nonetheless, the track was earmarked as the record's second single.

Charmingly embellishing the simple two part structure, the band crystallizes their first knowing attempt at utilizing base minimalism's hidden strengths. The words seek to effect the strongest possible feeling with the fewest possible phrases, this time not in a BEAT ON THE BRAT style disdain for lyrical convention, but in seeming awareness that with the perfect words chosen, expounding further was unnecessary. 'What can i say?' they self-reflexively ask, and more need not be said.

RAMONES I WANNA BE YOUR BOYFRIEND

Posted by BuncombeShinola at 3:44 PM

Labels: blog, humming a sickening tune, i wanna be your boyfriend, ramones