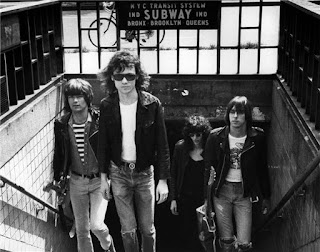 THE RAMONES, hoping to aid the securing of a record deal, made many demo recordings of their early material. Mostly recorded in the first part of 1975 (some sources even state late 1974) with a second, shorter attempt in September, these offer the best glimpses of the band in its formative stages. (Two notable films also exist from this period- a three song shambles of a 9/15/1974 performance featuring an eerily childike RAMONES at an astonishingly early CBGB show, and a powerfully raw, but still not quite fully developed setlong video shot at ARTURO VEGA's loft in March of 1975, basically halfway between the demo sessions.) Utilizing the 914 recording studios, Tommy Ramone's previous engineering experience, and  the peripheral input of first manager MARTY THAU, they offer a fascinating alternative insight into how the eventual debut album might have otherwise sounded. Their dense, primal sound reveals the surprising amount of dilution that the first record's somewhat conceptual mix wrought upon the quartet's fundamental power.

That so many songs are not in their final keys also brings into question the possible use of varispeeding. What purpose might be served by slowing the demo recordings down to these keys is unclear- and overall the tempos seem in line with how fast they were at this point, so for the present the assumption will be made that their playing has not been tampered with in speed. (Altering, for instance, JUDY IS A PUNK merely an exact half step away from the true tempo would create negligible result at considerable effort.) More on this technique later.

The bulk of the album's worth of demos were laid down at the earlier session. The songs were almost evenly divided between material headed for inclusion on the debut, and the remainder saved for the following lps or discarded in favor of other newer compositions. At the later September session they made second, more polished attempts at what were apparently regarded as their two most commercial songs: JUDY IS A PUNK and I WANNA BE YOUR BOYFRIEND. These two, as well as five from the previous attempt, appear as extras to the extended CD edition of the first album and thus will be given consideration later in their proper spot.

This section concludes with a link to a companion piece about these crucial, overlooked recordings, along with accompanying samples.

The other remaining uncollected songs, only briefly considered here in favor of their future essays, were as follows:

JUDY IS A PUNK
The first attempt at one of their most durable classics kicks off surprisingly in plain D (by the time of the second attempt in September the mystifying shift to its final key of  Eflat has been cemented, an extremely uncommon starting point for guitarists, but less surprising when the RAMONES' tendency to construct songs as blocklike patterns of barre chords is considered.) DEEDDEE's background vocals display a more distinctive (and, ironically, perhaps more commercial) melody than what was later settled on, and are mixed thrillingly high. Like many of these demos, the overall sound suggests that the heavier, thicker-but still catchy sound of their second lp LEAVE HOME was closer to the aural aesthetic being aimed for than the debut.
I WANNA BE YOUR BOYFRIEND
Their first ballad oddly escalates in key with each recording attempt. For this try they start in C, then climb to D in September, then finally settling in E for the lp. Perhaps not the wisest move- JOEY's vocal is far more relaxed and expressive here, although there is something to be said for the 'pleading' affect on his voice as he reaches in the higher keys later. With the BYRDS/SEARCHERS influenced secondary guitar riff, note should be made of the first overdub in the RAMONES recordings unlikely to be replicated in live performance.
CHAINSAW
Taken at a somewhat less frantic pace than the lp, which somehow augments the potency of the song's demented bubblegum.This effect is also shaded by the more menacing key of Fsharp, as opposed to the lp's more easily organized A pattern (Perhaps the band's favorite key?) No buzzsaw intro, but a prime example of the group's bizarre groove.
I DON'T WANNA GO DOWN TO THE BASEMENT
Once again, rooting the song in the lower key of D (E on the lp) gives a less strained JOEY opportunity to inject the vocal with extra gusto, while JOHNNY and TOMMY chug along at a slightly slower speed.
LOUDMOUTH
A step lower in key (natch) but otherwise quite close to the eventual performance.
53RD & 3RD
Perhaps amongst this group the likeliest proof of varispeeding, with D featuring the telling low end rumble associated with this song's true key: open E,  this is an otherwise impressively assertive band performace, with DEEDEE's vocals and TOMMY's drumming given greater prominence.
YOU'RE GONNA KILL THAT GIRL
Apparently the tune which first courted interest from their soon to be label SIRE, who offered a single deal for this song- an offer which the band resisted, holding out for an album contract. Surprising, then, that this track (in the true key, by the way!) was one of the two demos left off the first record in favor of the second, then only to be mixed down so weakly on LEAVE HOME that using it for a single became unlikely. Fortunately, this crunchy, energetic take remains- complete with JOHNNY not yet bothering to lower the volume of his guitar for the quiet passages.
I DON'T WANNA WALK AROUND WITH YOU
This pulverizing take (down a step to D) features some surprising bass embellishments from DEEDEE standing out from an overwhelmingly and confidently powerful performance of what was, at this point, one of their oldest songs.
TODAY YOUR LOVE TOMORROW THE WORLD
Featuring the uncensored, unapologetic original lyric, later altered at the behest of SIRE head SEYMOUR STEIN (although what exactly makes stating that one is a Nazi "baby" demonstrably more objectionable than stating that one is a Nazi "schatze" remains murky) this very, VERY early take displays the band already in considerable command of the beguiling power of their willfully precise primitivism. Varispeeded? Probably. Killer? Definitely.
WHAT'S YOUR GAME
This early JOEY demo would be held back until LEAVE HOME. Some of the background vocals and guitar trills are absent, but otherwise this take is extrememly similar to the final official rendition. Are those some guitar fills from JOHNNY almost audible on the instrumental break?

As stated before, the rest of these recordings will get their due as we reach their appearances on CDs. Below is a link to a blog where all of these demos can be heard.

THE RAMONES' OTHER DEBUT ALBUM via BuncombeShinola

Posted by BuncombeShinola at 12:36 PM