DIVING IN FOR A SWIM: A GUIDE TO GETTING WASTED WITH THE RAMONES-- list #3 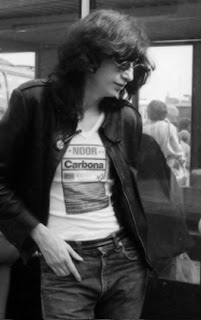 Gettin' fucked up. Though personal use was often denied or dodged—earlier more as a matter of careerism, and later more as a matter of aging as public figures responsibly (especially as health concerns became worrisome)—there can be no mistake: in the music of the RAMONES the topic of non-sobriety pops up as subject matter with some frequency. Admittedly, the band's lyrical landscape was often a somewhat cartoonish semi-reality, but through sheer specificity and repetition they cemented a certain familiarity. This ironically exacerbated situations in which they attempted to joke about it, and the already blurry lines were muddied further as members later wrestled with sobriety and its related regrets. (Incidentally, absolutely NO disrespect is meant anywhere here towards DEEDEE, whose premature end surely looms as a meaningful lesson to every fan.)

All judgements and/or endorsements aside, here's a handy guide to the Methodology of Getting Messed Up in the music of the RAMONES.

1. HUFFING/INHALANTS--When a band does a song entitled NOW I WANNA  SNIFF SOME GLUE, it must be expected that this will lead off the list. CARBONA NOT GLUE upped the ante with an expanded list of alternatives, including paint and roach spray. See also: SITTING IN MY ROOM, SOMEBODY LIKE ME

2. BOOZE--For a band somewhat identified with the use of illicit substances, there is a surprising amount of just plain old drinking going on around here. The whole spectrum from hard whiskey (QUESTIONINGLY) all the way down to basic beer (IT'S GONNA BE ALRIGHT) gets the nod. Gin not only gets mentioned (I LOST MY MIND) but a favorite brand is detailed (SOMEBODY PUT SOMETHING IN MY DRINK). Vino gets a lot of exposure over the course of their career, and BAD BRAIN even tips the champagne. The wide realm of responses is covered as well, from the miraculous joy of discovering beer in a soda machine (YOU DIDN'T MEAN ANYTHING TO ME) to the cloudy remorse of HAIR OF THE DOG. See also: TOO TOUGH TO DIE, SOMEBODY LIKE ME, DANGER ZONE, I'M NOT JESUS, BONZO GOES TO BITBURG, TOMORROW SHE GOES AWAY, THE RETURN OF JACKIE & JUDY

3. MEDICATION--Whether taken as pills, or administered via IV or hypodermic, the wide array of pharmaceuticals catalogued seems somehow inevitable for a band exhibiting such a deeply entrenched phantasmagoria of pychopathia. Thorazine. (WE'RE A HAPPY FAMILY, EVERY TIME I EAT VEGETABLES IT MAKES ME THINK OF YOU) Tuinal. (PSYCHOTHERAPY) Phenobarbital. (GO MENTAL) However, the last (listed) song on their last album seems to make a point where all this leads: When the going gets tough, the tough end up on morphine (BORN TO DIE IN BERLIN). See also: I WANNA BE SEDATED, SMASH YOU

4. HEROIN--Clearly, composing one of the definitive songs on the subject (CHINESE ROCK) was insufficient, for a seeming floodgate opened. From the brazen admission of WARTHOG and PSYCHOTHERAPY to numerous later cautionary admonishments (with perhaps an unavoidable pit stop with Sid & Nancy along the way in LOVE KILLS), the band wields the imagery of the user time and again--sometimes brutally realistic, sometimes a reflective metaphor for societal ill (EAT THAT RAT). See also: LEARN TO LISTEN, MAIN MAN

5. L.S.D.--Of course the RAMONES devoted an entire album to tripping musicians of the 60s (ACID EATERS), but besides the persistent rumour that LSD was the 'Something' put in RICHIE RAMONE's drink which led to a meltdown he ended up writing a great song about, the substance makes its lone appearance in the suitably demented I WANNA BE WELL.

6. COCAINE--BORN TO DIE IN BERLIN features a revealing vignette of DEEDEE sprinkling some blow on the floor, perhaps more likely to partake than to dispose (there's a scene oddly similar to this incident in the concert sequence of ROCK 'N' ROLL HIGH SCHOOL). However, besides the drug's appearance in one of my favorite RAMONES legends (see RAMONES-IT'S ALIVE: FUELED BY ELTON JOHN??!) it primarily functions in the band's lyrics as a prop of the detestable. See also: DON'T BUST MY CHOPS, CABBIES ON CRACK

7. MARIJUANA--The standby gateway is surprisingly scarce, perhaps due to its hippie connotations. A few tracks feature some eyebrow raising 'smoking' suggestions, but the closest they get to a genuine allusion is the name of the insane girl from WHAT'S YOUR GAME. That is, unless you think the 'dope' daddy's pushing in WE'RE A HAPPY FAMILY is this kind. See also: CHASING THE NIGHT, HOWLING AT THE MOON

8. SPEED--Considering how much of the band's reputation is built upon velocity, amphetamines surprisingly only make one appearance: ingested by the primary subject of HEIDI IS A HEADCASE.

9. DDT--No matter HOW fun I WANNA BE WELL makes the semi-outlawed pesticide sound, it is no doubt best to heed the lessons of TEENAGE LOBOTOMY. After all, you don't want to turn out a 'sickie.' Do you.

10. FEEDBACK--Perhaps it's best to wrap this up by considering the path of the surprisingly anti-drug I'M AGAINST IT and partake in ALL THE WAY's recommended high: feedback blasting in your ears. There is surely not a single RAMONES fan who could not relate.


Posted by BuncombeShinola at 11:03 PM