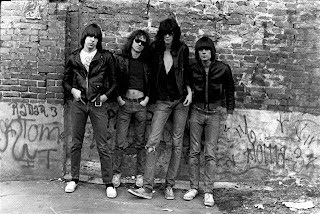 Doubtlessly one of the RAMONES most powerfully defiant statements, 53RD & 3RD displays the band's willingness to intermingle a warped, fantasy based world view with their own troublesome personal realities to the furthest possible extreme. The romanticized portraits of prostitution present in previous recordings such as THE BEATLES' Lady Madonna or KISS' Black Diamond are left far behind as the ante is upped via a male homosexual protagonist, a blunt first person narrative, and a remorseless razorblade climax. In the name of sick humor the group has already stretched the album startlingly beyond accepted thematic boundaries, and while the Vietnam vet detail (likely a red herring adherence to the still flowering militaristic bent) and exaggeration of the concluding crime's intensity point to the probability of artistic license, the brazen sizing up of a potential john--and the queasy uneasiness of potential rejection--and the desire for retaliatory violence--all ring disturbingly true. The possibility that lyricist DEEDEE may be maneuvering in unfamiliar territory (participatory or not) is all but quashed by the revelatory specificity of the song title's locale: a well known NYC boy hustler pickup area.

To this brutal tale is attached the debut lp's heaviest melody- a pummeling, medium tempo E-D-A progression uncharacteristically strummed with open chords to maximize the lingering drone, although DEEDEE diminishes the effect by predictably moving 'up' towards his preferred higher strings. (TOMMY has his back with some great tom work, though.) JOEY fearlessly manifests the threatening come on of the verses before retreating into the dejected weariness of the chorus' brief 1-4-5 tunefulness. Then, after two go arounds DEEDEE meaningfully opts to take his first (and on this album, only) stab into the lead vocal spotlight for the bleak middle eight, throwing himself headlong into the song's most intense phrases. Casting virtually all remaining doubt aside, he audibly stakes personal claim in a realm where blood must be spilled in order to reassert compromised manhood, no matter what consequences may be brought- even Retribution.

Somehow the intensity is ratcheted up further with a return to the chorus, this time modulated a step up from D to E. (This unfamiliar tactic is triggered by another rarity: a demonstrative drum fill from TOMMY.) Finally, the release of the repetitive closing coda commences, but not before they reveal one more trick up their sleeve- a surprising halt before the vocals once again re-enter.

This is perhaps, sonically speaking, one of the tracks which compares least favorably with the earlier demo version- although the deep aural qualities of that take may be the fallout of varispeeding down to a slower tempo (see RAMONES: THE EARLY DEMOS.) Still, the RAMONES' relentless extremism has resulted in a stunning detour of unexpected seriousness and potency. Drenched in merciless menace, the unflinching poetry of the unfamiliar angle remains as unique as it is unpleasant, and the oft repeated assessment 'one joke band' will henceforth only be uttered by the determinedly unobservant.


Posted by BuncombeShinola at 7:17 AM