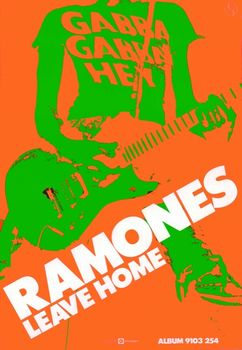 The expanded CD release of LEAVE HOME continues with a segue that few listeners were now accustomed to. Instead of the ballad b-side BABYSITTER or the single mix of the new single SHEENA IS A PUNK ROCKER, this running order duplicates the original sequence into this sequel of NOW I WANNA SNIFF SOME GLUE. Undoubtedly the RAMONES track with the single most checkered and confused history on their recordings, CARBONA NOT GLUE opened up a can of worms far out of proportion with the one minute and fifty one second song's actual attributes. Retrospectively, it seems like much ado about very little. Whether or not the manufacturers of the (debatably) abusable cleaning fluid actually instigated legal action against SIRE records--or merely threatened such action-- their panicked response seems cowardly, and more importantly potentially ineffectual. (With a number of albums already sold, could not lawyers representing CARBONA still sue for damages to their reputation even if different editions of LEAVE HOME were produced?) In hindsight, it seems almost comical that this concern had met no consideration until recording was over and copies of the lp were being shipped to stores. The controversy--whatever there really was to it--coincided with SIRE records being sold from ABC to the larger Warner Brothers label, and with some bad press still lingering over inhalant related deaths in England linked to SNIFFIN' GLUE (a fanzine named after the earlier song), perhaps it seemed that the most prudent move would be the removal of the possibly burdensome tune from future pressings.

The resultant confusion surely diluted LEAVE HOME's chances in the marketplace- first doctored with the replacement BABYSITTER in England (though not retitled on the sleeve, further begging the question of tactical effectiveness against litigation), then altered to include their latest single SHEENA IS A PUNK ROCKER for the initial Warners repackaging in America. A new cover design trumpeted this substitution, but by that time the sophomore effort was running out of steam. Even worse, a strong selling point had been robbed of the future release ROCKET TO RUSSIA, and although their third record outperformed the first two by some margin, speculation how well it may have done with SHEENA as its centerpiece instead is quite valid.

The song itself is a frenetic basher, full of the signature one-fret 'punk' downstroke upswings on the '1' beat (and elsewhere). An early experiment in frantic blocks of riffs moving over a shifting root key, CARBONA NOT GLUE's strengths will later be expanded into the relatively complicated structures of TEENAGE LOBOTOMY, WE'RE A HAPPY FAMILY, and ROAD TO RUIN's faster numbers. Perhaps somewhat cluttered by unnecessary measures of E before the middle and last chorus (if such a thing is possible within such a brief composition), the track hurtles through its paces- arriving quickly at a premature seeming fadeout. (Indeed, upon initial listens, not until the conclusion is it apparent that what seems like a bridge to the chorus is actually the middle 8.) The RAMONES themselves seemed very fond of the piece, tightening up an impressive arrangement of background vocals to embellish an already charged performance.

The lyrics themselves, eye of this supposed censorship storm, actually go to some lengths to make plain the misunderstood humour of NOW I WANNA SNIFF SOME GLUE. The zombified protagonist catalogues an array of exhausted huffable household chemicals before comically turning the blame to television's cathodes. He then ludicrously diagnoses a remorseless, hopleless, final condition brought on by 'shooting glue.' Clearly, the group seems determined to not have the joke missed a second time.

Stubbornly keeping the song in the live set well beyond any exploitable point, the band remained skittish regarding CARBONA years past any truly deserving need, even omitting it from the first archival release of LEAVE HOME as part of the ALL THE STUFF (AND MORE) series in 1990. Still, the RAMONES' affection for their troublesome problem child remained steadfast, and in 1991 the group finally maneuvered to bury a 'hidden' performance of the song deep in the LOCO LIVE cd. The same year they also permitted a 'bootleg' vinyl 45 release on SUB POP records, the only other way to obtain the studio version of this beloved, beleaguered orphan until its belated re-appearance here.

Posted by BuncombeShinola at 10:12 PM