THE SONG RAMONES THE SAME--List #5 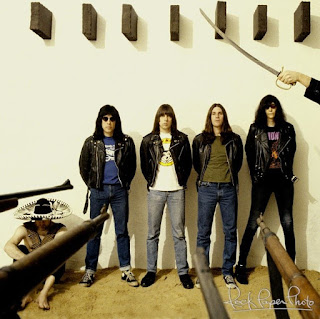 Ripping yourself off. All the great musicians do it. A career can be a long time, and occasionally when fresh ideas run a bit short, you fall back onto what you know best. Certainly, working inside a form as restrictive as primitive rock and roll, a certain amount of repetitive recognition is expected--even respected. Other times, the germ of a good idea is underutilized and it gets retooled for a more useful prominence at a later juncture. Either way, here's the Top Ten cases of the RAMONES getting caught at the Xerox machine in the Kinko's copy shop of Rock.

1. ROCKAWAY BEACH/ROCK 'N' ROLL HIGH SCHOOL/TOURING
Of course the 'Rock Rock' chants of the first couple are a dead giveaway to even the most passive listener, but otherwise the two pieces present a good example of how small differences in stylistically similar material can count for quite a lot, and each stands uniquely on its own. Not the case necessarily with Touring, which was originally planned to appear on PLEASANT DREAMS, just one album away from Rock 'n' Roll High School's END OF THE CENTURY. Eventually the band thought better of it and held back until the much later MONDO BIZARRO. Always a good idea to put some space between the related tracks when recycling this flagrantly.

2. I CAN'T BE/CHINESE ROCK
The crunchy middle eight of I Can't Be was just too good to be left resigned to a basically unused track, so DEEDEE consequently expanded it into one of his greatest trademark compositions. (For the record, RICHARD HELL only claimed ownership of one verse, which was later discarded by both the RAMONES and the HEARTBREAKERS.)

3. I WANNA BE YOUR BOYFRIEND/MY-MY KIND OF A GIRL
I Wanna Be Your Boyfriend's strengths mostly reside in its simplicities, but when JOEY opted to bring the song's concepts to full flower for SUBTERRANEAN JUNGLE the results were surprisingly successful, with a lyric full of evocative details and an arrangement full of knowing PHIL SPECTORisms.

4.COMMANDO/APEMAN HOP
This is probably the entry on this list where THE RAMONES put the least amount of effort in disguising the source material. It's still difficult to imagine the balls it required to ask ANIMAL BOY'S producer JEAN BEAUVOIR if he wanted to participate in the opening 'spoken' section of Apeman Hop. (He declined. Naturally.)

5. I DON'T WANT YOU/WHAT'D YOU DO
No sooner had JOEY's younger brother MICKEY taught the elder teenager the rudiments of ALICE COOPER's I'm Eighteen on guitar than he began revamping the progression for original material. Time and again over the years he would alter the three chord change for new melodies, but this pair is probably the two too closest for comfort.

6. BLITZKRIEG BOP/SOMEBODY LIKE ME
The 1-4-5 in A is one of the group's most durable terrains. At least one variant of it appears on virtually every record--even one side away from Somebody Like Me DEEDEE's Time Bomb exploits it again (transposed to C though). However, in this case there can be no mincing words. Aside from a chugging WALTER LURE overdub and slower tempo, this SUBTERRANEAN JUNGLE favorite kicks off IDENTICALLY to BLITZKRIEG BOP.

7. HAVANA AFFAIR/PINHEAD
Another early middle 8 customized and fleshed out into another classic. In a hurry this time too, on the very next LP.

8. IT'S A LONG WAY BACK TO GERMANY/LIFE'S A GAS
The KINKS-style downward scale was appropriated for ADIOS AMIGOS in the closing album's most existence affirming track. Still less blatant a copy than the MUFFS' Lucky Guy.

9. FREAK OF NATURE/DON'T BUST MY CHOPS
Both of these late era underraters feature an extremely similar signature riff on their title line choruses. The lessons of Touring have been forgotten apparently as this duo appeared on subsequent releases to each other. GREAT lyrics on the verses of both of these mid tempo thumpers from DEEDEE!!

10. GO MENTAL & YOU SOUND LIKE YOU'RE SICK/PSYCHOTHERAPY
Any observer who might consider the practice of this sort of reprocessing disdainfully would do well to chart the development mapped out over the course of this triumvirate. The earlier track Go Mental is a strong effort, with more institutionally lyrical details. A few years later You Sound Like You're Sick is more powerfully melodic (though also a tad more lighthearted). One album later Psychotherapy cannibalizes the strengths of both, streamlining into one of their most frenzied and celebrated cornerstones. Sometimes, you gotta just WORK it, kiddos.


Of course, in the end maybe everything is just one long identical song. We'll wrap things up with the closing credits music from the video LIFESTYLES OF THE RAMONES.


Posted by BuncombeShinola at 9:18 PM