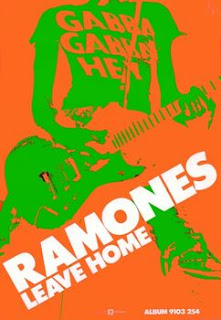 One of the sweetest of the RAMONES career ironies is that the hard rocking combo's ballads are, with startling consistency, amongst their releases' strongest compositions. That said, LEAVE HOME is something of an anomaly, featuring a duo of ballads ranking not only amongst this LP's weakest tracks, but amongst their least effective overall attempts to produce slower material. (The afterthought appearance of BABYSITTER quickly reverts to top notch quality.)

Clearly superior to side two's WHAT'S YOUR GAME, I REMEMBER YOU enjoys a durable popularity somewhat out of proportion with the recording's actual noteworthiness. Sluggishly and stubbornly hovering around E-B-A, only occasionally swinging up to nearby C on the verse's highest notes, the primitive melody leans more to the underdeveloped than the elemental. Ditto the bare lyric, which strives for but fails to match the transcendental haiku precision of I WANNA BE YOUR BOYFRIEND and the already written but later recorded HERE TODAY, GONE TOMORROW (one of their finest achievements). Clearly holding the song in some esteem nonetheless, the band kept the tune in the live set for a surprisingly long stretch-- and even nonsensically opted to make the track the leadoff single preceding LEAVE HOME's release in the UK, a questionable strategy which fell flat on its face.

What then accounts for this ballad's deep endearment amongst such a large contingent of the group's followers? The evocative image of nighttime recollection is well served by its vagueness, and the regretful lament does touch upon a universally familiar mindset. The pessimism of  'somehow they never really do' does ring true with hard earned experience, although the logic of this clinching line remains elusive (it's not as if the preceding phrase left any room for debate). Perhaps any such shortcomings are trumped by a compellingly attractive performance from JOEY, clearly struck by the song's starting points in his own life and striving therefore for a heartfelt perfection. And whatever the melody's weaknesses, the band is dead on-- especially effective during the tightened two chord middle sections, augmented with extra overdubbed muted guitar 'clicking.' The dense mix also does well to accentuate the RAMONES' peculiar strengths.

With the passage of time, of course, I REMEMBER YOU's themes of romantic loss and hindsight became more loaded as more fans encountered mortality in their own lives. Then, as tragedy finally felled actual band members, the mysterious ghosts of the song's retrospection gelled more widely into the mourning felt for the RAMONES themselves. (I myself witnessed a stunning performance covering this song in the days following JOEY's death.) And as the cruelty of each year's bereavement accumulates, it seems only more likely that the potent devotion elicited by this humbly virtued also-ran will continue to increase in power.

RAMONES I REMEMBER YOU


Posted by BuncombeShinola at 1:07 PM